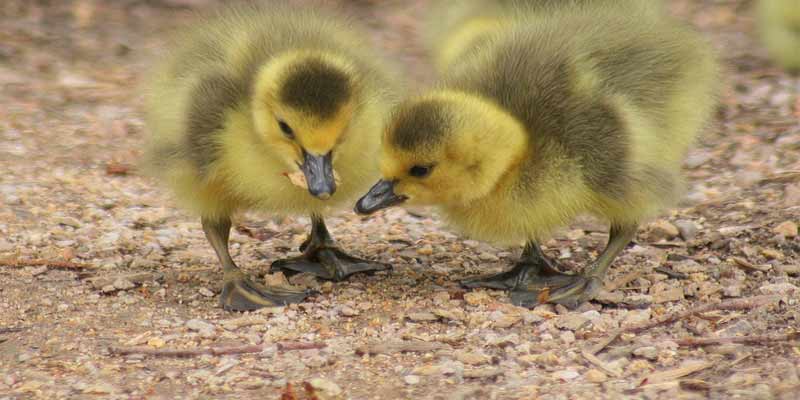 If you are raising ducks, you know the importance of the right food and nutrition. These will dictate how healthy the ducks will be. Chickens need plenty of grit in their diet to digest food correctly. As for ducklings, do they need grit as well?

Yes, ducklings need to have grit in their diet. Grit is the major component of the gizzard that helps them digest their food properly. Since ducklings don’t have any teeth to grind their food, the grit act as their teeth. It helps the food get grounded so it’ll be easier for the duckling to digest.

When ducklings are fed any type of food, they will need to eat grit as well. Unlike other animals, ducklings don’t have teeth to help them chew the food first.

Instead, grit will act as their teeth to help grind food in the gizzard. From there, the food along with the grit will move through the digestive system of the bird.

What is Grit Made of?

Grit is made primarily from ground-up materials such as crushed stones, pebbles, and sand. Some of the substances used are either soluble or insoluble.

Grit that is soluble is primarily made of limestone, which is calcium carbonate. Soluble grit is digestible and you can find them in cuttlebones and oyster shells.

On the other hand, the grit that is insoluble cannot be digested. These include silicates and sandstone.

Grit is found naturally in the bird’s environment and in pet stores. If you buy them from the store, they will be specially formulated.

Also, buy only manufactured grit from a reputable company. There is some company that will process oyster shells that have lead and other chemical contamination. By buying only from reputable sources, you won’t need to worry about contamination.

What Does Grit Do?

The primary purpose of grit is to help the duckling grind up food. By grinding up all the food items, it will be easier for them to digest it.

Since grit is mostly undigestible materials, it will stay in the gizzard for months and even years.

The primary grinding organ in ducks is the gizzard. This muscular part of the digestive system is responsible for grinding up large food particles. With the help of grit, the food particles will be ground down into tiny pieces that will be easy for the duckling to digest.

How Do Ducklings Get Grit?

In their natural habitat, ducks will generally stay around areas that have grits. By instinct, they know they need grits in their diet.

If the ducklings are allowed to roam freely, as they eat off the ground, they’ll also eat pebbles and small rocks.

On the other hand, if the ducklings are not foraging for their own food, you’ll need to provide extra grit mixed with their feed.

Feeding Grit to Your Ducklings

Grit is vital for proper digestion for ducklings. They need plenty of it especially if they are fed other foods besides commercial feeds.

To ensure the ducklings get enough grit in their diet, you’ll need to know how to feed grits to them, where to get grits, and when to give them grits.

Where to Get Grit for Your Ducklings

Fortunately, ducks can eat grit made for chickens too. Be sure when buying grit, it’s formulated for chicks to feed your ducklings.

Below are some of the grit I recommend for your ducklings:

When Should You Start Giving Ducklings Grit?

You can start giving them grit when the ducklings are at least 3 weeks old. Before that age, ducklings should only be fed on starter feed. These are formulated with ingredients and made for ducklings to digest easily without grit.

Once they are at 3 weeks, if you give your ducklings treats, seeds, grains, or any other food besides commercial feeds, you should provide grit for them. This will help break down the food so it’ll be easier for digesting.

Ducklings that are allowed to roam freely will start to eat grit themselves. This includes sand, small stones, and pebbles.

How to Feed Grit to Ducklings

In the wild, ducklings will naturally feed on the grit that’s around them. This can be anything from sand, pebbles, and small stones.

If you let the ducklings roam freely in the yard, they will find and eat grit on their own. This is the best way since it will encourage them to feed properly.

If grit isn’t available in the yard, you’ll need to provide them with grit.

When feeding the ducklings, place their food into a bowl and the grit into a separate bowl. The baby ducks will eat the food and eat the right amount of grit they need.

It’s not recommended to mix the grit into their food. The reason is that the duckling won’t be able to regulate how much of the grit they eat as part of their food. Consuming too much grit will cause food impaction, which could be fatal.

Yes, ducklings will excrete grit if it’s made of indigestible materials such as sand, pebbles, or granite. Once the material starts to wear out in the gizzard, it will naturally get passed through the digestive system.

For digestible materials such as cuttlebone, oyster shell, and limestone, the ducklings will not excrete it. Instead, it will get digested, broken down, and the calcium will get absorbed by the body. Calcium is important to maintaining strong bones, beaks, and producing quality eggs.

If the ducklings don’t eat grit, the food they eat may cause impaction. This is a serious condition that could lead to the death of the bird.

To avoid impaction, always make sure there are grits available, whether it’s natural or commercially processed. Ducklings will instinctively look for grit to eat when they feel the need for it.

Can Ducklings Eat Too Much Grit?

Too much grit can be dangerous for the duckling. If they ingest too much of it, it will cause impaction.

For duckling, they know how much they should eat. If the baby ducks are free to roam, their instinct will tell how much grits they need to eat.

To prevent the ducklings from eating too much grit, avoid mixing it in their feeds and foods.

Grit is necessary is for ducklings to help them digest their food properly. It’s made up of different materials such as sand, crushed stones, pebbles, and limestone. For the ducklings to have proper digestion, make sure to supply grit naturally or an additive to their food.